I taught some classes in Merry Olde England last weekend. I was hosted in London by Diane Wheeler at her club there in Tooting. I was told I was the first American instructor to visit.
A few clubs were represented and some traveled to take the class and stay overnight in Wimbledon. I enjoyed meeting some new people and re-connecting with both Diane and also with Phil Buck, one of Gary Ellis's black belts.
I did a session on what I call "Broken techniques"; techniques that can be split in half and either part can stand alone. It seemed to be well received and the time flew by.
Had some time in the pub with many of the attendees and got to know them and hear their views on the system. The time went too fast and I was off the next morning to the Channel Islands.
After working my way through the train system to Gatwick, I landed in Jersey to some beautiful weather, and it stayed that way all weekend. Paul McMurray, one of Graham Lelliott's black belts, was my host.
My sessions on Saturday for the young ones covered escape techniques for grabs and the adults were exposed to the thinking of defending a third person. The brown/black class worked on zone theory with some extension techniques as examples. I was told I gave a simple, understandable explanation of the principles. Mission accomplished.
Sunday we went through some ideas on the gun and knife defenses. We'd gone out Saturday night to a busy pub and even with some hangovers, these people were moving well.
I really enjoyed my time with both groups. In both locations, black belts from other school and associations were welcomed. All had a good time.
If you ever get a chance to visit Jersey (not Joysey), grab it. It's a beautiful island.
People have posted some photos of the classes on Facebook. I'm looking forward to going back.
Posted by Lee Wedlake at 1:52 PM No comments:

An excerpt from the latest article for subscribers at www.leewedlake.com


Putting shuffles and steps in where they were not before changes timing and tempo. This is part of the exploration process a serious student should be doing to see how variables affect the form, technique, basic or person themselves. One factor is combat is to know what a person could potentially do and it’s another to see if they can actually do it. I might know what a cartwheel kick is and basically how and when to do it but in actuality I can’t do one. I’ve found this to be part of the question/answer function of combat. The big problem is that often there’s not enough time to get it figured out. Doing things at different timing and tempos will give you some insight into what you can and can’t do.


Sometimes we’ve been taught a sequence with the wrong timing and when someone points that out and we try it we may be surprised to see it works better. The message here is that it’s not always the mechanics that mess us up, sometimes it’s the timing.
Posted by Lee Wedlake at 5:30 AM No comments:

Anyone even remotely familiar with the world of Kenpo Karate knows that the legendary Mr. Ed Parker trained 'The King of Rock & Roll', Elvis Presley, in the martial art.

What most do NOT know, is that Elvis took his training to new, uncharted levels.  Below is a rarely seen photograph of Elvis with his last martial art master and trainer. 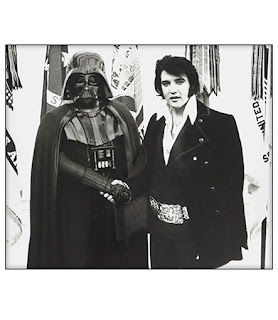 Posted by Lee Wedlake at 5:05 AM No comments:

I have added more podcasts, added videos to my YouTube channel and changed the Free Video pages at www.kenpoTV.net. This  month's article for my www.leewedlake.com subscribers will be up soon, too.

Under construction but here it is.

www.theinternationaljourney.com
Posted by Lee Wedlake at 6:45 PM No comments:

The Brain in the News paper I get every month had an article in it about assessing brain damage in pro fighters. Here's the link.

They want to get boxers and MMA fighters to volunteer for a research project. They think it would be of interest to know what sort of health implications are involved in these sports. Muhammed Ali has Parkinson's and they speculate that boxing was a contributing factor.

This is not a way to say the sport should be stopped. One scientist thinks it would enhance the quality, keeping in only the fighters of high quality. The article also states one as saying "We know fighting is not good for your health."

Really?
Posted by Lee Wedlake at 10:23 AM No comments:

I don't like this at all.
http://www.youtube.com/watch?v=8JNFr_j6kdI&feature=player_embedded
Posted by Lee Wedlake at 7:56 AM No comments:

I've been told that there will be a second book to The Journey. When the first came out I was disappointed to see that some of the European instructors had not been included. I'm told that's going to be corrected with this book.
I'm not sure what the criteria is for inclusion this time but I got a call from John Sepulveda telling me I'm in. Some others I've seen on the list are Mr. Sepulveda, Tom Kelly, Steve LaBounty, Gilbert Velez, Mike Pick, Huk Planas, Frank Trejo, Brian Duffy, Jeff Speakman and Brian Hawkins, and more.
More info as I get it.
Posted by Lee Wedlake at 11:46 AM No comments:

The manuals are done and available thru my site store at www.leewedlake.com.
Posted by Lee Wedlake at 11:40 AM No comments: