There was a young man on that flight from Amsterdam to Detroit who took action when others did not. I'm told he's 23 years old and from Holland. Other passengers assisted in restraining the man. We need more people like this guy and the others. They are sheepdogs!
Posted by Lee Wedlake at 8:29 PM No comments:

The price of gangsta cool

I know all kids are not gangsters but the style of wearing pants low is an impediment to running or kicking in self-defense. Here's an extreme example of why not to wear them low.

Killer Tripped Up by His Own Baggy Pants

NEW YORK (Dec. 18) -- A career criminal massacred three members of a family in their apartment but fell to his death when he tripped over his own baggy pants.
The massacre occurred Thursday afternoon near a string of upscale shops on Manhattan's Upper West Side. Police said the attack apparently stemmed from botched drug ripoff.
"There is a significant amount of heroin found in the apartment," Police Commissioner Raymond Kelly told the Daily News.
David Karp, AP

Workers from the medical examiner's office carry the body of a murder suspect who fell to his death from an apartment building fire escape.
Police said Hector Quinones, 44, shot and killed Carlos Rodriguez Sr., 52, and his 24-year-old son, Carlos Rodriguez Jr., then stabbed to death the younger Rodriguez's grandfather, Fernando Gonzalez, 87, according to reports in the Daily News and the New York Post.
The elder Rodriguez's wife, Gisela Rodriguez, 49, and her daughter, Leyanis, 28, walked in on the carnage. Quinones heard keys in the lock and opened the door for the women, police said.
He shot the mother, who was grazed on the head by a bullet but managed to run from the apartment. The killer was just about the grab the daughter when his low-slung pants fell down and he tripped, the Post said. That gave the young woman the chance to run into a back room, where she found the bodies of her brother and father.
Quinones yanked up his pants and scrambled after Leyanis Rodriguez, who climbed onto a fire escape, screaming for help to construction workers on the roof of a nearby building, the Post said. The attacker followed her onto the fire escape, but once again his drooping pants fell and he tripped, plunging three stories to his death.
Estella Carrino, who manages a street-level bicycle store in the building, said she heard the body hit the ground.
"He had no jacket on and his pants were down. He was very dead," she told the Daily News.

Filed under: Nation , Crime
Posted by Lee Wedlake at 4:32 PM No comments:

I've recorded about a half-dozen podcasts on kenpo and they should be available soon. I did some interviews while in California last week that will be posted. Subjects include Amy long's book The Kenpo Continuum , some time with Graham Lelliott taling about Ed Parker and his wife Leilani and some time with school owners on what their teaching philosophy is.
I've got lots of material to record and send out but I'll be looking for your feedback on subjects to answer your questions.
Posted by Lee Wedlake at 6:33 AM No comments:

Once again, we had a great time in California. Graham Lelliott arranged for me to teach at his new studio in Clovis and over at Pete Valdez's studio in Madera. Both are in the Fresno area.
Mr. Valdez hosted two seminars at The Dojo, his year-old school. I did a session for the kids and also conducted a women's self-defense class. The children were great to work with, Pete and his assistants are doing a great, job with them. The women's class was the same one I run as a community service here in Florida; it was the first time I'd done that class outside my own school. It was a mix of ladies from the studio and women who had no training at all. Pete wants to use the format to offer his own program and I'm all for it. We need more women to know how to avoid trouble. That's Pete's group below. 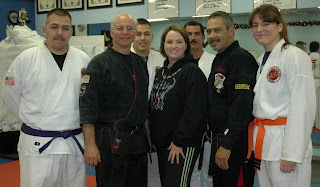 The Saturday seminar at Graham's was fun for us all. I started with compounding moves from techniques, threw in some offensive stuff, and we got into some soft-style concepts. The class was attended by all ranks and members of four studios, Graham's, Pete's, Amy Long's group from Sacramento (photo below) and Tony Velada was in from Chicago. (Sorry if I missed anyone.) 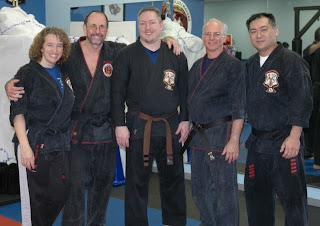 The Lelliotts have a Christmas show for the families every year and the kids did a wonderful program. The them this year was the Nutcracker, very appropriate for Kenpo people I think. Little Dragons to teens were involved and Saint Nick even showed up to do a sword form and pass out candy canes.
It was my last trip of the year and a good one. Thanks to Pete and Gloria for their efforts at The Dojo. Thanks also to Graham and a pat on the back to his wife Jaydean for all the hard work in putting together their show.

Photos by Amy Long.
Posted by Lee Wedlake at 4:41 PM No comments:

Today marks the 19th anniversary of Ed Parker's passing. I think about him and miss him every day. We're marking the day with some comments from my black belts at the end of our class tonight. Please keep him in your thoughts.
Posted by Lee Wedlake at 9:30 AM No comments:

We're almost done editing the re-done Yellow DVD. It's 41 minutes and has the original 10 Parker techniques on it. The first one was shot in the 80's. This one is the same length but has only the techniques in some detail - no basics, freestyle techniques or forms on this one. Pre-ordering will be open soon on my website store at http://www.leewedlake.com/
Posted by Lee Wedlake at 6:18 AM No comments:

Bill Spearman has just about finished editing my new DVD on the original ten Parker yellow belt techniques. It runs about 45 minutes on the ten techniques. Those I've shown it to have said they like the format and the information presented. It's got enough detail to keep both new and experienced students happy. Look to be able to pre-order it on  my website soon.
Kenpo Karate 201  has been out of print for a short time but I've ordered some more from the printer. They should be in my hands by the first of January, so you can order now while they're on sale and and they'll ship that first week of the year, if all goes according to plan.
Posted by Lee Wedlake at 8:31 PM No comments:

I'm off to central California to teach at The Dojo in Madera, CA and Graham Lelliott's Central Valley Karate Club in Clovis. Hope to see some of you there.
Posted by Lee Wedlake at 8:26 PM No comments:

Barbara Barnhart was recently promoted to 3rd degree black. Barb is from the Chicago area and started with me as a white belt before I left for Florida in 1991. She's been at it steadily and has a rep as a lady who's a heavy hitter. I've seen her take the guys right off their feet.
Barb teaches with her husband, Kurt Barnhart, one of my sixth degrees who runs Phoenix Kenpo in the southwest Chicago suburbs. Nice job, Barb!
Posted by Lee Wedlake at 8:24 PM No comments:

Frank Shekosky is hosting a seminar with me in March. His studio is in Middletown, near Hartford. Here's the link. http://www.cromwellmartialarts.com/seminar.html


He also does Modern Arnis and taught recently at one of their events. Here's a link for that, too. http://www.youtube.com/watch?v=JRRyMLX8O7s  He sells instructional videos on Arnis and you can reach him through his website to get them.
Posted by Lee Wedlake at 6:45 AM No comments:

Last seminar of the year

I will be in California the weekend of the 11-13th to teach seminars at Graham Leliott's new studio and at The Dojo, run by the Valdez brothers in Madera. Both schools are in the Fresno area.
That Friday evening I will do a class for kids at The Dojo, followed by a women's self-defense class. On Saturday I'll do two adult seminars at Graham's. I hope to see you there.
For info contact info@thedojo.com or glkenpo@hotmail.com.
Posted by Lee Wedlake at 7:10 AM No comments: