A 63-year-old former engineer may not fit the typical image of a dark-clad assassin with deadly weapons who can disappear into a cloud of smoke. But Jinichi Kawakami is reputedly Japan's last ninja.
As the 21st head of the Ban clan, a line of ninjas that can trace its history back some 500 years, Kawakami is considered by some to be the last living guardian of Japan's secret spies.
"I think I'm called (the last ninja) as there is probably no other person who learned all the skills that were directly" handed down from ninja masters over the last five centuries, he said.
"Ninjas proper no longer exist," he said as he demonstrated the tools and techniques used in espionage and sabotage by men fighting for their samurai lords in the feudal Japan of yesteryear.
Nowadays they are confined to fiction or used to promote Iga, some 350 kilometres (220 miles) southwest of Tokyo, a mountain-shrouded city near the ancient imperial capital of Kyoto that was once home to many ninjas.
Kawakami, a former engineer who began teaching ninjutsu -- the art of the ninja -- ten years ago, said the true history of ninjas was a mystery.
"There are some drawings of their tools but we don't always find all the details," which may have been left deliberately vague, Kawakami said.
"Many of their traditions were passed on by word of mouth, so we don't know what was altered in the process."
And those skills that have arrived in the 21st century in their entirety are sometimes difficult to verify.
"We can't try out murder or poisons. Even if we can follow the instructions to make a poison, we can't try it out," he said.
Kawakami first encountered the secretive world of ninjas at the age of just six, but has only vague memories of first meeting his master, Masazo Ishida, a man who dressed as a Buddhist monk.
"I kept practising without knowing what I was actually doing. It was much later that I realised I was practising ninjutsu."
Kawakami said training ranged from physical and mental skills to studies of chemicals, weather and psychology.
"I call ninjutsu comprehensive survival techniques," though it originated in war skills such as espionage and guerrilla attacks, he said.
"For concentration, I looked at the wick of a candle until I got the feeling that I was actually inside it. I also practised hearing the sound of a needle dropping on the floor," he said.
He climbed walls, jumped from heights and learned how to mix chemicals to cause explosions and smoke.
"I was also required to endure heat and cold as well as pain and hunger. The training was all tough and painful. It wasn't fun but I didn't think much why I was doing it. Training was made to be part of my life."
Kawakami said he was "a strange boy" growing up but his practice drew little attention at a time when many in Japan were struggling to make ends meet in the hard post-war years.
Just before he turned 19, he inherited the master's title, along with secret scrolls and special tools.
Kawakami is careful not to claim the title of the "last ninja" for himself and in the sometimes sectarian world of ninjutsu there are doubters and rival claimants, with the disputes centring on the authenticity of various teachings.
Kawakami says much of the ninja's art lies in catching people unawares, rather than in brute force.
"Humans can't be on the alert all the time. There is always a moment when they are off guard and you catch it," he said.
It is all about exploiting weaknesses that allows the ninja to outfox much bigger or more numerous opponents; distracting attention to allow a quick getaway.
It is possible to hide -- in a manner of speaking -- behind the smallest of things, Kawakami said.
"If you throw a toothpick, people will look that way, giving you the chance to flee.
"We also have a saying that it is possible to escape death by perching on your enemy's eyelashes; it means you are so close that he cannot see you."
Kawakami recently began a research job at the state-run Mie University, where he is studying the history of ninjas.
But, he said as he showed an AFP team around the Iga-ryu Ninja Museum and its trick house with hidden ladders, fake doors and an underfloor sword box, he is resigned to the fact that he is the last of his kind.
There will be no 22nd head of the Ban clan because Kawakami has decided not to take on any more apprentices.
"Ninjas just don't fit in the modern day," he said.
Posted by Lee Wedlake at 4:07 PM No comments:

I have uploaded two more, one about Mr. Tom Kelly, another about the Kenpo Senior Conference.
Three more are recorded and ready to go soon. They include an Ed Parker story about what he'd be doing if he were not doing what he was. The others are about age, I guess triggered by thinking about the passing of Sibok Kelly and related to this Ed Parker story. You can hear them through iTunes (for free) or use the link on my page at www.wedlakekenpotv.com/leewedlake.
Posted by Lee Wedlake at 8:07 AM No comments:

It's all in your head

BBC article says much of your punching power comes from your brain.
http://www.bbc.co.uk/news/science-environment-19290320
Posted by Lee Wedlake at 9:01 AM No comments:

There will be a service in Wichita, KS for Mr. Kelly.
Friday August 17th at 10am. Location: First Pentecostal Church 1755 E. McAurthur (McArthur and Hydraulic)
Looks like Steve LaBounty, Bob White, John Sepulveda, Gary Swan, Tommy Burks and others will be there.
I have written something about Mr. Kelly that John Corcoran at MA Success magazine says he will print in their November issue. 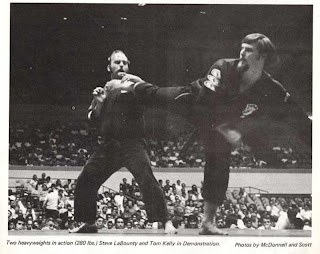 Posted by Lee Wedlake at 4:32 PM No comments:

Here's an excerpt from the August article for subscribers on my website. It's on triangulation of the body.


Triangulation shows up very well in the formation of the forward bow stance. The front and rear leg positions create two sides of the triangle and the floor is the third. The position of a punch or strike makes an open-ended triangle. Your chest is the “base”, your arm is one side, and the other is open. It’s an isosceles triangle. If you change it to a scalene triangle, in which there are no equal sides or angles, you can hurt yourself. Punches are typically taught with your hand lined up with your center, at the point of the isosceles triangle. If you’re off-center the bracing angle goes away and your shoulder can’t take the force, resulting in injury in many cases. Even if you don’t get hurt it tends to disturb your stance and position.
$29/year for a subscription to the monthly article including all the back issues. www.wedlakekenpotv.com/leewedlake and look for the premium membership.
Posted by Lee Wedlake at 4:29 PM No comments:

A kenpo legend passed away yesterday at his home. Tom Kelly was Mr. Parker's right hand man for many years. He was on the American team that trounced the European team and those fights are seen in a video called The New Gladiators.
Mr. Kelly was called Sibok, a Chinese term for senior student. He was the senior. Mr. Kelly was Mr. Steve LaBounty's first black belt. He was Huk Planas's first kenpo teacher. He served as the Executive Vice-President of the IKKA and was the tournament coordinator for the Internationals.
Sibok is credited with creating the Kicking Set, now called Kicking Set One. He added the tradition of turning belt knots to the side. I'm told he created or influenced some of the other sets, too. It was he, along with Huk, that helped Mr. Parker create the first manuals for the 1970 curriculum that all others are based on today.
In the years after Mr. Parker passed he worked with many groups but had a strong association with Mr. Joe Palanzo and the WKKA. He could be found at their yearly gatherings in Baltimore. A few years ago I was asked to be there and had hours of private conversation with him.
I had an invitation out to him to be part of our upcoming event here in Austin, TX in October. I knew he'd been ill and had been kept informed of his condition through Mr. LaBounty and one of Mr. Kelly's students. He had called me a few weeks ago and I missed him. I was unable to reach him afterward and I regret that.
My condolences to his family, and those in our community who knew him.

Posted by Lee Wedlake at 8:16 AM No comments:

My webmaster has been working to reorganize the videos within the various levels on the site.
The plans is to group the basics, the forms, the techniques and the terminology/principles into four blocks to make them easier to find. The search box helps, too.
I have sent him several more Kenpo 401 extension technique application clips, too. I'll be shooting more videos this weekend in Ft. Myers, as well.
The playlist function we had on the original site will be coming back by your requests. That's down the road, though.
I have about 50 more videos to upload for all the levels and they'll be coming at you as we get the reorganization done.
Thanks for your patience. Your comments have been very positive and I appreciate your support.
Posted by Lee Wedlake at 7:08 AM No comments: