Marc Rowe found this information and it's related to a tennis stroke but certainly applies to any motion.

Technique: The Kinetic Chain
10/12/04 6:57 PM
(The information in this article was taken or adapted from the High
Performance Coaching Program Study Guide.)
The parts of the body act as a system of chain links, whereby the
energy or force generated by one link (or part of the body) can be
transferred successively to the next link. The link system in the service
action, which starts from the ground, can be explained in the following way
(Elliott and Saviano, 2001; Elliott & Kilderry, 1983):
a.. Leg drive
b.. Trunk rotation
c.. Upper arm elevation
d.. Forearm extension, upper arm internal rotation and forearm
pronation
e.. Hand flexion
The optimum coordination (timing) of these body segments and their
movements will allow for the efficient transfer of energy and power up
through the body, moving from one body segment to the next. Each movement
in the sequence builds upon the previous motion and they all contribute to
the generations of racket speed.
This transfer of energy in sequential coordination is also enhanced by
the stretch-shortening cycle of muscle action. The stretch-shortening cycle
involves the active stretching (the muscle is activated but is elongated by
another force) of a muscle in a countermovement immediately followed by a
more forceful shortening of the muscle in the desired direction. In the
forehand, for example, the chest and shoulder muscles are actively stretched
(coaches often use the cue "loading" here) as the trunk rotates into the
shot and the inertia of the arm and racket cause them to lag behind.
The active stretch of the muscle stores energy in the elastic elements
of muscle and associated tissues such as tendons, which is reused as the
muscle begins to shorten. This sequence of muscular coordination tends to be
chosen naturally by the brain, but sometimes this must be coached in players
who develop pauses, that in turn lead to missed segment rotations or
problems in sequencing segments.
The most effective tennis strokes begin with leg drive generating
ground reaction forces that can be transferred up the segments of the
kinetic chain to the racket. Proper timing of the segments in the kinematic
chain and stretch-shortening cycle muscle actions maximize the transfer of
energy to generate the greatest racket speed.
Example-One-handed backhands tend typically involve five kinematic
links that the player has to coordinate (Groppel, 1992). In most cases the
one-handed backhand is based on a sequential summing of the motions of the
legs, trunk, arm, forearm, and wrist/hand. Two-handed backhands during
early learning use fewer body segments, so many young players find this
stroke easier to coordinate. In the modern two-handed stroke a similar
number of segments are rotated as for the on-handed stroke.

Posted by Lee Wedlake at 8:12 AM No comments:

I want to wish everyone a happy holiday!
Posted by Lee Wedlake at 8:07 AM No comments:

The following article sent by Marc Rowe essentially says that if you use imagery of doing something after you've physically practiced it well, it's more efficient when you execute it.

This study used functional magnetic resonance imaging (fMRI) to investigate
differences in brain activity between one group of active high jumpers and
one group of high jumping novices (controls) when performing motor imagery
of a high jump. It was also investigated how internal imagery training
affects neural activity. The results showed that active high jumpers
primarily activated motor areas, e.g. pre-motor cortex and cerebellum.
Novices activated visual areas, e.g. superior occipital cortex. Imagery
training resulted in a reduction of activity in parietal cortex. These
results indicate that in order to use an internal perspective during motor
imagery of a complex skill, one must have well established motor
representations of the skill which then translates into a motor/internal
pattern of brain activity. If not, an external perspective will be used and
the corresponding brain activation will be a visual/external pattern.
Moreover, the findings imply that imagery training reduces the activity in
parietal cortex suggesting that imagery is performed more automatic and
results in a more efficient motor representation more easily accessed during
motor performance.

Posted by Lee Wedlake at 4:51 PM No comments:

Tucson, AZ and other thoughts

I'm going to Arizona for the first time in two weeks to teach at Shawn Knight's camp there the first weekend of December. Ed Parker Jr and Steve LaBounty will be on staff, too, so I'm looking forward to that. I'm also looking forward to seeing Carole Wolken, my first Judo instructor, who is retired there. Carole lost her husband last year but she's doing well and we're going to have some time to hang out during my visit. If it hadn't been for Carole I'd have likely decided martial arts were not for me.
Just recently I was told some stories about initial experiences in the arts that defined perspectives on what the arts are about. I had a bad Judo teacher at the YMCA when I took my first few lessons. My mom thought I really liked it so she enrolled me at a full-time school, which is where I met Carole. She corrected my mistakes and I found that learning to fall and roll was fun, not painful. That may literally have been a meeting that changed my life.
A few days ago I took a flight check with an US Air Force officer/check airman, Major Carlos Salinas. He'd heard I'm a "karate guy" and I asked him if he'd ever taken it. He had when he was a teenager living on the US Marine base at Parris Island. He told me the first or second lesson he had with his friends and a Marine who taught the class they were learning to spar and the instructor broke his buddies nose with a spin kick. He decided that studying the arts was not for him.
That same day when my deputy director for Standards and Evaluation here in Florida Wing called me to see how my ride went we got to talking karate. Alan was US Army and kick-boxed in the service. He told me about how his first lessons with a military instructor when he was a teen were complete with kicks in the solar plexus when he or his friends were caught talking in class. It didn't stop him from continuing but he remembers it well as a negative experience.
I don't want you to think this is limited to military instructors. Lots of instructors think it's OK to hit their students in such manners. Maybe less today since people started to sue karate teachers but it's still happening.
A student I had in Ft. Myers had her nose broken in her first college Tae Kwon Do class. She quit but came back to it many years later with me, with a lot of encouragement (and courage). She's now approaching black belt with Mike Squatrito at Gulf Coast Kenpo.
Yes, we have to hit students when teaching techniques to show the physical effects to some degree. I've been hit plenty hard many times. I've have the chipped teeth, scars, and pains to show for it. But I don't hit kids and new students hard. I don't even hit the black belts too hard anymore though they tell me that even soft feels hard.
And my flight check? Successful. Major Salinas was very happy with me and my program here in FL. He told us at the hangar that he is inspired by the volunteers we have in the Civil Air Patrol. And I didn't even have to break his nose.
Posted by Lee Wedlake at 5:55 AM No comments:

The snowbirds are coming back to SW Florida and the majority of them are older people. I was in traffic today and the car in front of me had license plates that said "Pray Now". I have to wonder if the owner is very religious or a really bad driver.
Posted by Lee Wedlake at 2:48 PM No comments:

Who thinks of this stuff? 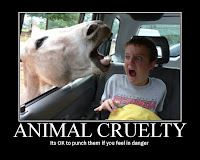 Posted by Lee Wedlake at 5:00 PM No comments:

Ed Cabrera did two nice seminars at Gulf Coast kenpo in north Cape Coral last weekend. He taught the kids class Friday evening the basics of boxing and power generation. On Saturday he did what he calls a boxing infusion. Ed has created a series of techniques using both Kenpo and western boxing principles. He used Raking Mace as his main example. You can see how he does it if you look for him on You Tube. http://www.youtube.com/watch?v=LSK_hX2pjIE
Posted by Lee Wedlake at 3:16 PM No comments:

It's almost done! Lessons with Ed Parker is almost ready to go to print. It's close to 200 pages of his concepts, stories, ideas, insights into his personality, my experiences with him, and photos. I'm hoping to get it out by Christmas. The cover was done by Ed Parker Jr.

Posted by Lee Wedlake at 6:36 AM No comments:

Dr. Rowe sent this along. While some of it may not seem important, the information on how dancing helps can easily be related to martial arts instruction, showing further benefit to what we do.

In addition I have a hand-made Huk knife to sell for $400. It's marked with his name and "New Orleans".

Contact me at lee@leewedlake.com or thru the website if you're interested. I'm told it's worth about $500 or so.
Posted by Lee Wedlake at 2:27 PM No comments:

I was hosted by Graham and Jaydean Lelliott at their Central Valley Karate Club in Fresno, CA last weekend. As always, it was a good time. All the seminars were well-attended. The Friday kids were a blast. The Saturday sessions went well, with one for mixed ranks and a family groupings seminar for the brown/black class. Sunday I did a lecture section on instructing for instructors. Afterwards we went to Fred and Julie Bell's home to have dinner with them and Marty and his wife Sheri, and Armen George. Fred has opened a class in his home in the west Fresno area, with his garage converted to a nice studio. We took a ride down the road to Madera to see Pete Valdez's new studio there, called The Dojo. (www.valdezdojo.com). Very nice facility; matted and they have an undersize boxing ring, too. The studio has a great look to it and I think they'll do well. His brother, Trini, was working hard when we were there and he'll be part of the success story.
Thanks to Fred and Kent for the t-shirts they gave me. Amy Long was there from Sacramento, too. Always good to see her and everyone out there.
The Lelliott's are holding their bi-annual camp in May on Memorial Day weekend at Wonder Valley. See www.glkenpo.com for info.
Posted by Lee Wedlake at 2:15 PM No comments:

One of those days... 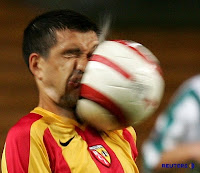 Posted by Lee Wedlake at 6:18 PM No comments:

I started teaching Kenpo in 1973. One thing that is an absolute must for the guys to have and wear is a groin cup. Kids, too. In today's legal climate it's even more important. With having many a single mom bring their son in for lessons I found that many of them were not sure how to approach the subject with their boy about wearing a cup. After all, most of them had little or no experience with such apparel. (However, I did meet a woman in a Chicago school who wore one since it was a bit rough there and I found that many of the women in the school in Sweden I visited often used them, too.) Often the moms would want me to explain it to their son but one mom told me that she told her little karate master that it was "super-underwear". 'Nuff said.
Posted by Lee Wedlake at 6:13 AM No comments: