I've been asked how many tenth degrees there are in our system. That's a tricky question. Does that mean the "current" Ed Parker system or does it include the variations? Using the latter criteria I have found 27 people (no women) claiming 10th. They outnumber the ninth degrees 2 or 3 to 1.
Posted by Lee Wedlake at 9:36 AM No comments:

The doctor is ON

Have to brag about my friend, Marc Rowe, again. He recently competed again and won two gold medals in powerlifting. Marc, if you don't know, is over 80. Earlier this year he set a record in his age group for deadlifting, now this  month he earned a Master class gold.
Marc attributes a portion of his success to use of tai chi principles and not just for the physical part.
My congrats go out to him!
Posted by Lee Wedlake at 3:42 PM No comments:

Take a minute to reflect

On this day in 1990 we lost Ed Parker to a massive heart attack at the age of 59. It was a huge loss to the martial arts community. Those of you who do kenpo in particular, take a moment to reflect on how he affected your life, whether you knew him personally or not. Thsi is not limited to our system, he affected the growth of other systems in the US as well.
I miss him every day.
Posted by Lee Wedlake at 8:40 AM No comments:

The first weekend of December I was up in Chicago at Kurt Barnhart's clubs. Nice turnouts there. I even had my first tai chi instructor, Bill Grizzle, in the crowd. The subjects on Friday evening and Saturday morning were the internal aspects and he and Patrick Baio, both long-time practitioners, attended. I'm impressed with Bill's attitude in that he came and worked with us as a student. I managed to pick his brains a bit while he was there as well. Zoran Sevic from the John McSweenet lineage always comes to thump and I'm glad to have him and his open mind, too.
The second Saturday session was on working in the Web of Knowledge as a teaching tactic. I've done this elsewhere and Mr. Barnhart's people were tough to throw off. (This method is the subject of this month's article on my website.) 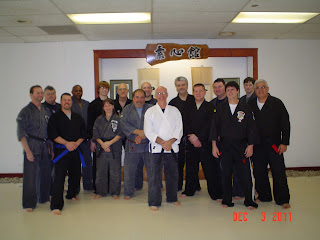 The following weekend's seminars in Holden, Massachusetts and Manchester, NH were well-attended. I had the opportunity to meet some new people and see my old friends Bill Gaudette and Lance Soares. Brian Walsh from Connecticut made the trip to Holden to take part along with his son, Chris. Brian and I have been communicating by e-mail and this was the first face-to-face. Good to have him there. Mr. White and I also had lunch Friday with a man we much respect, Hanshi Richie Bernard of Shidokan International.
On Saturday in New Hampshire we had a full house in both sessions. The subject at Holden and Manchester was drills in one session and knife work in the second. The seminars were not duplicates and those who made all four got a special t-shirt. 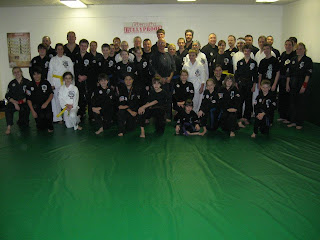 Mr. White and I surprised the group there at his school by unveiling Ed Parker's gi top. This will be on loan from me and on display there at the Manchester Karate Studio. Since MKS is the largest Parker kenpo school in the US, I thought it was appropriate to make them the stewards of a precious piece of kenpo history. 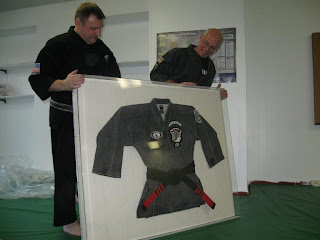 http://m.wimp.com/intensefight/
Posted by Lee Wedlake at 11:42 AM No comments:

I've posted the December article for subscribers. The title is Teaching to the Web of Knowledge. It really should be in the Kenpo Instructors Handbook but I've isolated it for now. Here's an excerpt.

However, there is an opposite and reverse for everything. Instead of asking for a technique by name I ask the class to do what they know for a grab, that being part of one of the categories on the Web. Then I watch to see what comes out. It is apparent that most don’t think of their techniques in terms of the categories on the Web. When I ask for grabs I see chokes, locks, hugs, holds, even pushes (an entry to a grab?).
What this exercise does is allow you to cover the distinctions between each type of attack classification. Can you explain the difference between a hug and a hold? Why do you think he grouped locks and chokes together? Then there is the obvious - weapons go with weapons and the two-man techniques stand alone.
Yearly subscriptions for written articles are $29 and you subscribe at www.leewedlake.com
Posted by Lee Wedlake at 9:41 AM No comments: