I've added a section to my instructor's handbook articles in the Member's Section of my website. It's titled Changing Your Approach. In it I address what I think is the instructor's obligation to change their approach when teaching something a student is "not getting". I hope you find it helpful.
Posted by Lee Wedlake at 5:51 AM No comments:

The seminars at Cromwell Martial Arts in Middletown were a success. Participants came from Pennsylvania, Massachusetts, New York and Connecticut. At least three lineages were represented and everyone was welcomed. Feedback I got was that they enjoyed the seminars and were "treated well".
This was the first time I formally presented my Body Mechanics seminar. I did 1:45 on how the joints work in their respective alignments and various ways to achieve stance and rotation. Risks of misalignments were shown and ways to avoid presented. I was glad Frank Shekosky, my host, asked me to do the presentation. The feedback I got on this on was that it filled in some gaps and was what they needed to know.
The second class was on the standard Parker freestyle techniques. They are simple and effective but many schools don't teach them.
It was a good weekend, one of those that went way too fast. Look for another event there in the fall. 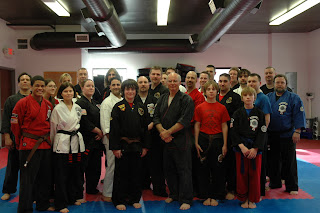 Posted by Lee Wedlake at 6:10 AM No comments:

I was up in Connecticut this past weekend doing seminars at Cromwell Martial Arts. After the seminars we went out for dinner and Sean Crehan of Franklin Family Karate in Franklin, MA told me he'd found a program that pays the tuition for karate lessons for children of those serving on deployment in the National Guard and reserve forces.

Sean also says the program pays for other activities as well. Worth a look for you school owners.
Thanks to Sean for the tip.
Posted by Lee Wedlake at 5:40 AM No comments:

Those of you who are subscribers to my website will see a new article on conducting exams just posted. It's a long one. I think you'll find some useful information in it.
Posted by Lee Wedlake at 5:03 AM 1 comment:

Saturday I'll be teaching three seminars at Cromwell Martial Arts in Middletown, near Hartford. Frank Shekosky is the host. I've taught at his studio several times and have always been well-received. Frank's wife, Deb and both his daughters train, too. They're a nice family.
Frank has an unusual and interesting picture in his lobby. It's him with Wally Jay, Remy Presas and George Dillman. What's rare about Frank is that he has a black in Parker kenpo and was also promoted to black in the Presas system of Arnis by Professor Presas.
I had met Remy Presas in Boston with Ed Parker and we all went to lunch. When Professor would visit Florida, he'd call me. The first time I had no idea who it was on the phone and he was laughing. My turn was next when I surprised him at a seminar. I was just hanging out and he did a double take, then came over a hugged me. Great guy.
Anyway, Saturday I'll do a  kid's seminar and two for adults. Details are on his site at http://www.cromwellmartialarts.com/.
Pray for Frank - he's picking me up at Bradley International at 5:30 on Friday.
Posted by Lee Wedlake at 8:36 PM No comments:

I have a poll posted here regarding video evaluation. Over the year I have been asked if I would look at a DVD of a person's performance  and comment. I do that from time to time and the comments have been that it's very helpful. Other people do this and set a limit of 5-7 minutes for the video. At first I thought it was too short. Through filming my own stuff for the upcoming online learning site I found that you can pack a lot of infomation in a short time if you do it right. The aforementioned time limit now makes sense.
The consequent report to the student takes much longer to compose than watching the video. I recently did one for a 3rd degree black belt and he was very much on track with his forms, so commentary was somewhat limited. But it still took a bit of time to write up what I saw so that he had a written record to refer to while practicing and "sharpening his sword".
Back in the 80's I had a black and white video camera that I used to tape my forms and techniques. I was always surprised to see mistakes I made that I missed in the mirror or by feel. My recent tapings have also shown me I still need some fine-tuning. This is especially useful if you don't have an instructor or he/she lives some distance away.
Newer technology such as Skype will also allow for more personal instruction. I plan to institute use of these tools and would like to further my "school without walls" concept. Please participate in the polls so I can structure a suitable program. Thanks.
Posted by Lee Wedlake at 8:19 AM No comments: 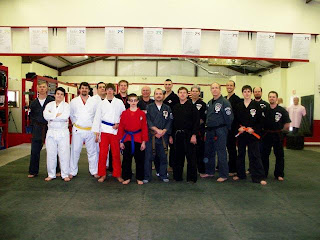 My Professional Development Seminar held at Coastal Kenpo Karate near Charleston last weekend was a success. Nick Dreiling hosted. His school there continues to improve. He's re-done the layout and it looks great. His demo team did a demo for us between seminars and the kids just keep getting better.
I flew into Columbia, SC and spent the night with Bruce and Krista Meyer. They showed me some true Southern hospitality. Bruce and I drove down to Charleston the next day. I was really glad to be able to get the extra time to spend with them.
Almost 20 practitioners attended the Saturday PDS, ranging from white to black belts, from three states. We covered almost half of the original Parker orange belt techniques. The guys had good questions and we all learned something.
Nick plans to have me up there a few more times this year and to progressively cover the system from Orange up. Hope to see you in Charleston in 2010.
Posted by Lee Wedlake at 4:03 PM No comments: