The Kenpo Senior Conference is almost here. There's a lot of buzz about it and I'm looking forward to seeing old friends and meeting people whose names I know but have never met.
We have people coming from coast to coast and from Germany. Registration has been good and the Saturday night dinner is pretty packed.
Late registration is open a another few days at www.wedlakekenpotv.com/kenposeniorconference. 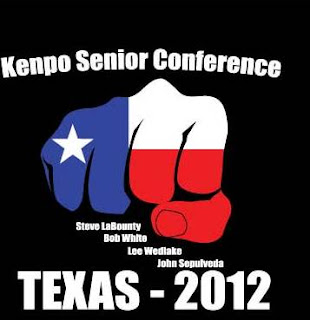 This is the t-shirt design. We ordered a few extras, so if you did not pre-order, you should be able to get one at the event.
Posted by Lee Wedlake at 7:00 AM No comments: 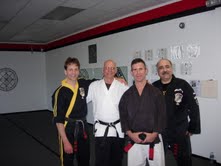 I was at Marc Shay's American Karate studio in Broomall, PA, near Philadelphia, last weekend. I spent the day teaching a seminar and some private lessons before having to head back to the Baltimore area, where I had attended a family get-together for Jan.
I started the day by working privately with Marc. He and I have a common experience in being studio owners and teaching Yang Tai Chi along with the Parker system. Marc's forms look strong. Being a "forms guy", it's close to my heart. I have accepted Marc as a direct lineage student after his completing my required one-year "probation". It was a pleasure to see his face light up when I "punched him in" as Sam Babikian watched. Marc is now working on his thesis for sixth black.
The seminar was on "Pre-fight Indicators". Marc had asked me to do that based on a comment I make in my seminars. I ask people to think about what leads up to having to face an opponent and apply a technique. It was the first time I'd done that seminar, so I'm glad he asked. I'm told it was interesting. We'll have that subject covered here at the Austin event by retired police officer Ron Sanchez of Southern California, too.
Just before the seminar, my student Brian Price of Leesport, PA, promoted Stephanie Hammond to third black. Brian is my "main man" in Pennsylvania. He's a strong, all-around martial artist and he trained Stephanie for third after her coming to him as a second degree. He had her run Form Six and some technique extensions she created in front of a packed house. I've known her since she was a teenager living in Florida, so it was good to see her progress.
The seminar was pretty packed with several schools represented. Dan Meck was there, it's always good to see him.
I finished the day with three more privates with Sam Babikian, Alex Collo and Jim Deery. They work as a team. They took notes for each other, something you don't see often. I'm happy to see their progress.
It was a good visit, and too short. I had to go back to make an early morning flight out of BWI (too early). I'll be back up in PA in the late spring. Watch my site for dates.
Posted by Lee Wedlake at 6:51 AM 1 comment:

Jack Nilon and Peter Tas worked together to arrange a tour of several clubs and schools in Melbourne, Sydney, Brisbane and Adelaide. I did nine seminars over 7 days to both youth and adult groups. Subjects included my "Great Escapes" and the rearrangement principle for the kids, Ed Parker's freestyle techniques, club defenses, "Broken Techniques" and technique interruption drills for the adults. I did private and class sessions, too. Pete had asked me to be a special guest at his juniors tournament on the first Saturday, too. I sat on the forms boards and was the center judge for the upper ranks in sparring. The tournament ran well and the kids took home a bunch of nice trophies. I ran a short seminar for the participants immediately afterward, too.
Along the way I met many people I'd been contacted by online and was able to put faces with names. I saw some whom I'd met at a previous seminar I did in Sydney in 1999 or at Graham Lelliott's Wonder Valley camp in California. Good to reconnect as well as meet new people.
The instructors who hosted seminars were Peter Tas in Melbourne, Tony Billman in Epping (near Melbourne), Tim Barnes in Adelaide ( place with a time-zone difference of one-half hour), Jack Nilon in the Sydney area and Jo Stenzel in the Brisbane area (she was helped out by Steve Broadbent there, too).
﻿
I stayed with the Tas family the first few nights. Pete's wife, Jodie, was a marvelous hostess and put up with Jack, Tim Barnes, and myself. Pete is a bit of a shrinking violet (far from it), so it got a little nuts at times. Memorable quote from was from his daughter to Jack; "You've just been owned by a nine-year-old girl." Jack, Pete, Tim and I went to the Peninsula Hot Springs the day I arrived. Quite an experience and a great way to relax after a loooong flight. www.peninsulahotsprings.com/ The weather was perfect and it went down the tubes the following days, turning to rainy and colder. 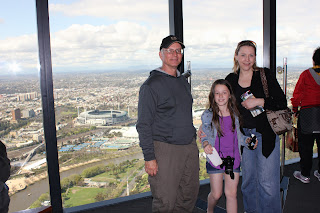 One of the days with the Tas family we went down to downtown Melbourne. Along the way we stopped at the beaches. We went up in the Eureka Tower to the 88th floor observation deck and the weather cooperated. We followed that with a visit to The Shrine of Remembrance, a war memorial to the ANZAC veterans. It's worth a visit.  www.shrine.org.au/
﻿

Tim Barnes hosted in Adelaide. He's a chemistry professor at the "Uni" there. Aussies abbreviate almost everything and "uni" is the university. I'd never been to either Melbourne or Adelaide before and it was a treat to see the areas. Tim and his wife, Tracey, put Pete, Jack and myself up for a night, then we were back to Melbourne. They have a beautiful little girl who will be a heart-breaker and probably win a Nobel Prize.
Tuesday, back in Melbourne, we went over to Tony Billman's Australian Kenpo Concepts. Tony's instructor is Tommy Chavies. Mr. Chavies is an excellent technician. I'd met him at the Pasadena studio and we've crossed paths at the IKC many times. Good man, and his rep, Tony, looks to be doing it right.
I stayed with Jack, and his brother, Adam, and their mom in Sydney. I caught up with Adam and some of Jack's mates. It was good to see how they're doing. Jack and I went to do some ATV/quad-bike riding out along Peat's Ridge. First time for me. Jack told people I was throwing dust and dirt at him but I believe he was ahead of me most of the time. Good fun.
We jumped another airplane up to Brisbane (Aussie security is nothing like the the TSA) and met up with Peter Tas again and Steve Broadbent "Broadie". Steve and Pete work under Graham Lelliott, and they love him. Steve's wife, Merry, was now in the mix with us and she gave as good as she got. The Friday night seminar was at Jo Stenzel's Studio MMA www.studiomma.com.au and the turnout for both seminars was good. She had a small barby afterward with steaks and sausages, so we could talk with the troops. We joined her again at her home with her husband, Ted, the next night for more good food and conversation.
Broadie took us to Mt. Tamborin for a look around. It's on the edge of the rainforest and has an artsy downtown area. The road going up is pretty intersting and I saw lots of motorcycles heading that way.  Afterward we went down to the Gold Coast, next to Surfer's Paradise. It's a lot like Ft. Lauderdale. The Brisbane area looks a lot like south Florida.
Nilon took the entire time off work to be with me through the trip. That gave me lots of time to look at his material, watch him teach, check his time-in-grade and see how he worked. I promoted him to 4th degree black. He's now got his assignment for his 5th black thesis and moving forward.
Peter Tas took a lot of work time off, too. He was with me in Melbourne, Adelaide and Brisbane. He, like most of the people I met, are hungry for info and want to represent the system well. Pete took the photos you see here, too. More later.
Posted by Lee Wedlake at 8:52 PM No comments: