I was alerted that one of my former teachers, Mr. Trejo, had a stroke very recently. I was not sure if it was rumor, so I sent word out and got verification. He's 60% recovered, from what I'm told.
Thanks to Sam Babikian in PA for the news. More details as I get them.
Posted by Lee Wedlake at 11:49 AM No comments: 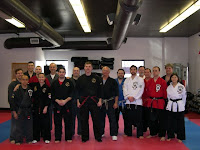 me in twice a year to work with his group. This time we had attendees from five states. The subjects were knife defense and two man techniques, as well as a kids seminar in which we worked on defending while on the ground.
Over a dozen of us went out for Japanese food and the chef put on quite a show. I met some new people and saw some old faces. It was an enjoyable weekend. We are discussing another visit for the fall. Watch the website for dates.
Posted by Lee Wedlake at 8:43 AM No comments:

In my writing and teaching I have mentioned how the brain works with selective perception. I related how a video of two basketball teams passing the ball is shown and the audience is asked to count how many passes are made during the clip. That's the task. Something else happens while they are tasked and most people miss it. So, here's the clip, as presented in a lecture.

Studies also show that talking on a cell phone while driving is like driving under the influence and this selective perception related to task shows how we miss things. You can see how this would affect your martial arts as well.

I'm from Chicago, where they dye the Chicago river green for this. I've got Irish in me on my mother's side. The Pratt family came from County Cork. The family lore says we are related to William Pratt, who you know as Boris Karloff. Explains some things, doesn't it?
Posted by Lee Wedlake at 6:01 AM No comments: 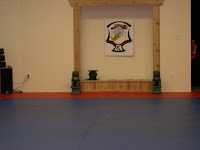 Tony Velada in Chicago sent these Chinese Foo Dog statues as a kind of housewarming gift for my new studio. They are guardians so we put them in front of the Parker crest on our tokonoma, a place for valued objects. Thank to Tony and his family for the gift.
Posted by Lee Wedlake at 9:44 AM No comments:

I will soon be offering a seminar DVD entitled Defending the Third Person in my website store. It was shot at Shawn Knight's IMAC camp at his school in Tucson last December. Shawn and his people were good enough to give me an edited copy for distribution.
In the seminar I take some "out-of-the-box" techniques and apply them to a situation you may encounter in which you have to protect a third person such a a friend, child or spouse. It takes Mr. Parker's third perspective into application in another way.
I haven't got the price set yet but if you check in the store in the next few days it should be available for purchase. www.leewedlake.com/store.asp
The full camp DVD is available thru Mr. Knight at www.americaninstituteofkenpo.com. It has myself, Steve LaBounty and other instructors on it and retails at $40.
Posted by Lee Wedlake at 11:39 AM No comments:

A slice of history

The piece below has been circulating on the web for years. I have a student, Rick Stone, who was a POW in a German camp, so I forwarded this to him for comment. Please read the story, then read Rick's comments afterward. I think you'll enjoy the little bit of history.

WWII Starting in 1941, an increasing number of British airmen found themselves as the involuntary guests of the Third Reich, and the Crown was casting about for ways and means to facilitate their escape. Now obviously, one of the most helpful aids to that end is a useful and accurate map, one showing not only where stuff was, but also showing the locations of 'safe houses' where a POW on- the-lam could go for food and shelter. Paper maps had some real drawbacks -- they make a lot of noise when you open and fold them, they wear out rapidly, and if they get wet, they turn into mush. Someone in MI-5 (similar to America 's OSS ) got the idea of printing escape maps on silk. It 's durable, can be scrunched-up into tiny wads, and unfolded as many times as needed, and makes no noise whatsoever.. At that time, there was only one manufacturer in Great Britain that had perfected the technology of printing on silk, and that was John Waddington, Ltd. When approached by the government, the firm was only too happy to do its bit for the war effort. By pure coincidence, Waddington was also the U.K. Licensee for the popular American board game, Monopoly. As it happened, 'games and pastimes' was a category of item qualified for insertion into 'CARE packages', dispatched by the International Red Cross, to prisoners of war. Under the strictest of secrecy, in a securely guarded and inaccessible old workshop on the grounds of Waddington's, a group of sworn-to-secrecy employees began mass-producing escape maps, keyed to each region of Germany or Italy where Allied POW camps were located (Red Cross packages were delivered to prisoners in accordance with that same regional system). When processed, these maps could be folded into such tiny dots that they would actually fit inside a Monopoly playing piece. As long as they were at it, the clever workmen at Waddington's also managed to add: 1. A playing token, containing a small magnetic compass 2. A two-part metal file that could easily be screwed together 3. Useful amounts of genuine high-denomination German, Italian, and French currency, hidden within the piles of Monopoly money! British and American air crews were advised, before taking off on their f irst mission, how to identify a 'rigged' Monopoly set -- by means of a tiny red dot, one cleverly rigged to look like an ordinary printing glitch, located in the corner of the Free Parking square. Of the estimated 35,000 Allied POWS who successfully escaped, an estimated one-third were aided in their flight by the rigged Monopoly sets. Everyone who did so was sworn to secrecy indefinitely, since the British Government might want to use this highly successful ruse in still another, future war. The story wasn't de-classified until 2007, when the surviving craftsmen from Waddington's, as well as the firm itself, were finally honored in a public ceremony. Anyway, it's always nice when you can play that 'Get Out of Jail Free' card.

Mr Wedlake,
As you know the Germans separated the various forces ,army ,navy and airforce into different prison camps.
For some reason the airforce camps were "better" than the army camps. They had things allowed them that the soldiers didn't. This Monopoly business was one. I was aware of the program but never participated in it.
Most of anything that could keep the soldiers from being bored was taken from us, including decks of cards.
Surprise visits from the guards was a regular thing day and night to catch us doing anything that was "not allowed".
As regards to the air force. There was one pilot, rather famous, who had lost both legs, but insisted on flying.
He was shot down and taken prisoner. Upon chuting out both of his artificial legs were damaged, the German headquarters got in touch with the British government and arrangements were made to provide a plane to fly him over a new set of legs. The plane was given information as to where the camp was, the plane flew over unmolested and dropped the legs in the camp.
Oddly enough,some time after that the individual was caught trying to escape so the guards took his legs away from him.
Rick
Posted by Lee Wedlake at 6:59 AM No comments:

I re-opened my studio last week. I have to say I have concerns abut opening a "new" business in the present economic climate but I was sent some figures that reassure me.
I opened my first school in the Chicago area in mid-1976. According to the data I have, the national unemployment rate was 7.8%. When I relocated it in 1980 or so the rate was 7.5%, having dropped into the 5% range in 1978. It dropped into that range again in the late 80's. When I moved to Florida in late 1991 and opened the studio here in January 1992 it was 7.3%. It was in the 5% range again in 1994 and went to 3.9% in 2000. It's been creeping up since then and the February 2009 number is 8.1%.
With the exception of the two-year gap from 2007 to now, I have been in the karate business since 1976, over 30 years. I, and other well-run schools, have weathered the recessions more than once. And we'll do it again.
Posted by Lee Wedlake at 6:47 AM No comments:

Our resident Australian, Jack Nilon, has departed and is back in Sydney. Jack spent a little over a year here in Florida learning more of the system and polishing his stuff. He taught his first big seminars when I brought him along with me to New Hampshire and coordinated and promoted the birthday bash event we had here last month. He's spent time learning the karate school business. And I promoted him to 3rd black during the trip.
I've known Jack for 12 years now and he's become a younger brother to me. He was a big help with getting the new studio up and running in the last weeks he was here. He's made many friends and we miss him already.
Mr. Nilon will be starting to teach down there soon. You can reach him at pksaustralia@gmail.com. I wish him good luck.
Posted by Lee Wedlake at 5:48 AM No comments:

Who thinks of this stuff? 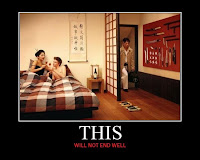 Posted by Lee Wedlake at 7:37 PM No comments: