I posted some more podcasts last week and astonished to see there have been almost 30,000 downloads since June of 2010. I've gotten some good feedback, too. One that comes to mind is that they are "not kenpo-centric". That's what I was aiming for.
I've also uploaded some more clips to www.kenpotv.net and should hit 1,050 this week. The new site is about to go live, so watch for an announcement on that.
With the Thanksgiving holiday here, I wanted to say thanks for watching and listening.
Posted by Lee Wedlake at 11:30 AM 1 comment:

For you aviation buffs

I found that this B-25 bomber is based about 20 minutes from here in Georgetown, TX. I sat in the cockpit and was told I could work toward a type-rating in it. Just what you need, me in a bomber.
http://vimeo.com/30331646 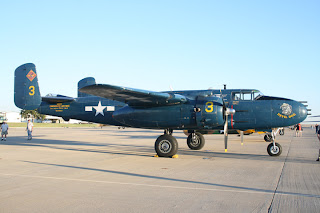 Posted by Lee Wedlake at 9:00 AM No comments:

Who changed the names?

Information related to the recent poll on this site. I've left it up so you can see the results.

I always wondered about the difference in the technique names between the Parker and Tracy schools. Did the Tracy's leave Mr. Parker and change the names? Or did he change them after they left and opened their own schools? Who felt the need to make that change so they could be different from the other?
I could see reasons for either party to do this, so I asked around. What I was told was that it was Mr. Parker who made the changes.
If anyone has more info, I'd like to hear it.
Posted by Lee Wedlake at 8:54 AM 4 comments:

I have posted the November article for subscribers on my site. It's on what I call the "shooting gallery effect". Here's an excerpt.

I was told many years ago that what makes us different from other systems is our rules and principles. It’s what makes any system different from another. Each has its own set of rules they go by. Even if it’s “no rules”.


We look at motion and determine what guideline is in use. Is it a power principle, method of execution, type of contouring, etc? Normally we see what we expect to because we ask ourselves why we would do some combination of rules and how they are supported by a rule or principle. It may be better to ask ourselves why we would not do something. I have found that to a fruitful way to analyze what I do.
Posted by Lee Wedlake at 8:49 AM No comments:

Gil Hibben at the Alamo

I was in San Antonio and went to visit the Alamo. In the museum/gift shop there, in a case, was a Gil Hibben Bowie knife. What a pleasant surprise to see my friend's work there.
And before one of you wise guys says it, no- I'm sure he DIDN'T drop it there.
Posted by Lee Wedlake at 6:38 PM No comments:

A young couple moves into a new neighborhood.
The next morning while they are eating breakfast, the young woman sees her neighbor hanging the wash outside.
"That laundry is not very clean", she said. "She doesn't know how to wash correctly. Perhaps she needs better laundry soap."
Her husband looked on, but remained silent.
Every time her neighbor would hang her wash to dry, the young woman would make the same comments.
About one month later, the woman was surprised to see a nice clean wash on the line and said to her husband: "Look, she has learned how to wash correctly. I wonder who taught her this."
The husband said, "I got up early this morning and cleaned our windows.”
And so it is with life.
What we see when watching others depends on the purity of the window through which we look.
Posted by Lee Wedlake at 3:38 PM No comments:

...this is how many instructors teach.

obscurantism \uhb-SKYOORr-uhn-tiz-uhm\, noun:
1. Opposition to the increase and spread of knowledge.
2. Deliberate obscurity or evasion of clarity.
Posted by Lee Wedlake at 9:57 AM 1 comment:

Just back from New Orleans. I did some seminars for Danny Sullivan's Covington Karate Studio up on the North Shore. It was my first time there.The kids were a pleasure to work with. I met some of Danny's Mississippi people who came over for the adult seminars, as well.
After working on Danny Friday we went with his students Greg and his son Grant, along with Paul down to the French Quarter to eat at Cafe Giovanni. The restaurant was a nice place and the conversation with the guys was varied and interesting. Danny, Greg, Grant and I walked down to Cafe du Monde afterward to have some beignets. That's a place you don't want to miss if you're in Nola.
He's got a good group there at his school, which was opened last year and is growing. His website is www.covingtonkaratestudio.com.
The LSU-Alabama game was scheduled for that Saturday evening after the seminars and the excitement in town was almost tangible. I see LSU won the game, so all those fans I met have to be excited.
On the plane ride back I sat next to an interesting man who, as it turned out, went to high school in Covington and is living in Houston.
We're planning another event for spring. I'll have to starve myself between now and then because all those guys do is eat. And watch football.

I loaned out my copy of Living the Martial Way by Forrest Morgan. I was given a brand-new copy in return. I decided to read it again since I'd be sitting in airports and I'm glad I did.
Mr. Morgan is a very traditional stylist and I like that perspective. His descriptions of what was going through his mind during organizational meetings are much like my own. Being a retired US Air Force major his outlook on what a warrior is and isn't is interesting. His book is well-researched and the bibliography is extensive and includes many excellent books on the subject.
Morgan discusses the definition of what a martial arts is and concludes that the traditional definition is a little too restrictive. He says that according to Don Draeger, a martial art is one that was developed by warriors for use on the battlefield.  Therefore, by that definition, what we do in Kenpo and numerous other arts today is not martial arts.
You and I probably have a problem with that, and so does Morgan. Define "warrior" (he does in the book but you need your own). Define "battlefield". (It's "battlespace" now in modern miltary terminology.) I think we might call someone who is fighting an addiction as a warrior in their own battlefield.
I don't disagree with Morgan, as he points out, that definition doesn't really fit. It does raise the point to me that Parker Kenpo is not a military system but a civilian self-defense system. People have asked me about this when discussing the comparisons with Russian Systema. That is a military system, ours is not. Of course, ours has been adapted for use on real battlefields since Vietnam and when you're in a knock-down, drag-out street fight, that's a battlefield.
It's 20 years old but still timely. I recommend you read it.
Posted by Lee Wedlake at 10:52 AM 1 comment: